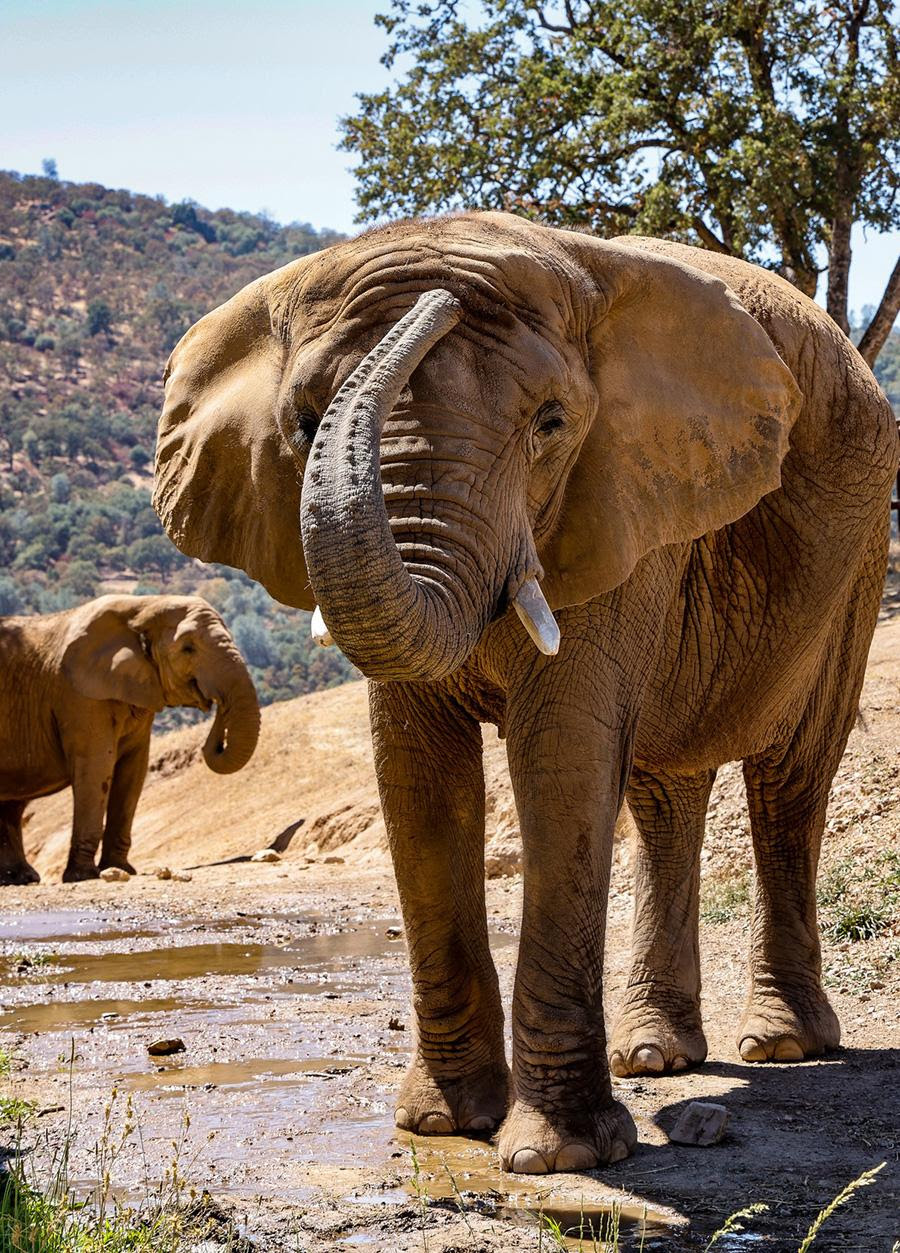 African elephants Thika (front) and Mara pay a visit to one of their favorite mud wallows. Happy Birthday to Thika who turned 42 on October 18! Putting Elephant Welfare FirstElephants are highly social beings, and it is often assumed that in captivity they naturally would get along with any other elephants. However, this simply isn’t the case. Not too different from those social animals we call humans, elephants can be choosy about their companions. While some captive elephants may form social bonds, others may simply tolerate one another. In the worst scenarios, there is outright aggression. Female elephants in captivity are immediately at a disadvantage. Although elephants are social animals, it is unnatural for them to live with unrelated elephants. In captive situations, including sanctuaries, elephants may live with elephants who not only are unrelated, they may have come from entirely different counties. Whereas free-living female elephants remain with their natal families for life, forming vital, lifelong relationships. (Males gradually leave their families at about 12 to 15 years of age.) The disruption of these durable social bonds – as when calves are ripped from their families and exported for display – causes trauma that stays with them for life. Captive-born elephants can also experience trauma, including rejection and even harm by inexperienced mothers (who likely underwent their own traumas), living in the dysfunctional social situations that abound in captivity, and separation from their mothers or a close companion when transferred to another location. 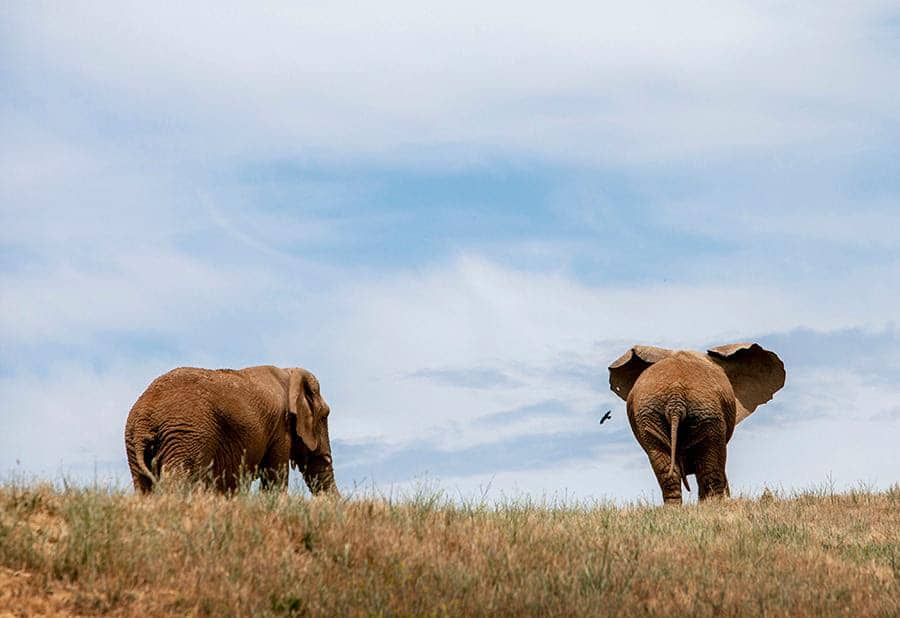 In essence, all elephants in captivity carry psychological “baggage” that often is evidenced in their behavior. African elephant Lulu was kidnapped from her family in Swaziland at age two and sent to a zoo. Another elephant (who also was captured in the wild) dominated Lulu for years, often trapping her in a corner or blocking access to food. When Lulu arrived at PAWS, she was so anxious around other elephants she would sometimes squat down as if to make herself as small as possible. We worked slowly with Lulu, helping to build her confidence and comfort with the other elephants. She eventually became a “leader” among the elephants. Today, Lulu – who is the oldest African elephant in North America – spends quiet days with companion Toka (pictured above). African elephant Thika was born in captivity. She grew up in a space-restricted environment in which at least some of the elephants were incompatible. According to reports, these incompatibilities resulted in injuries and even death. (At least one YouTube video documented serious fighting between the elephants.) Thika displayed aggression, including toward Toka, with whom she made the trip to PAWS in October 2013, along with Iringa (who later passed away due to longtime foot and joint disease). Thika’s aggression toward Toka did not abate at PAWS, so the decision was made to separate the two elephants. 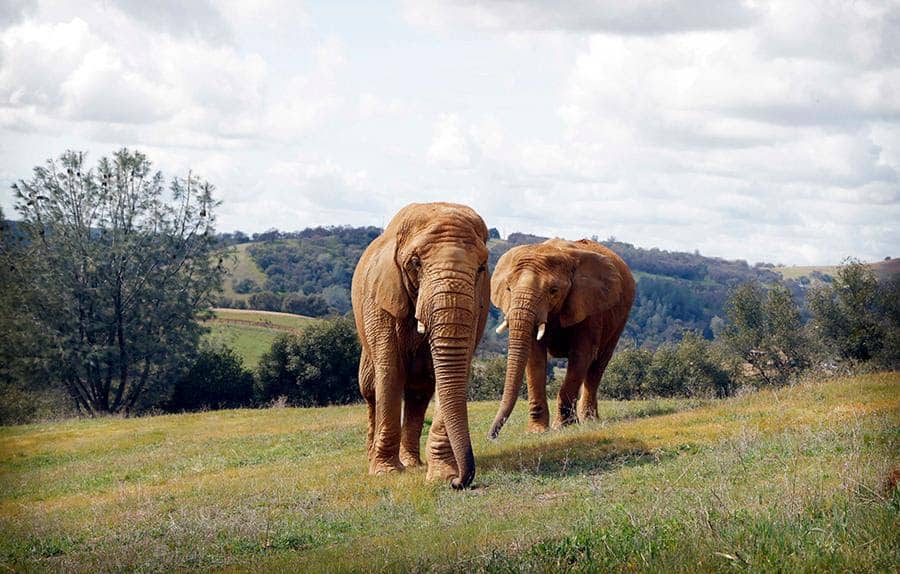 Our goal, in part, was to alleviate the social stress that Toka was experiencing and allow her to feel more relaxed – as she is with Lulu. For Thika’s well-being, she was introduced to Mara who is PAWS’ longest resident and a very confident elephant. Nothing seems to phase her! This pairing could not have turned out better. Thika began to follow Mara around like a little sister, and today the two are never far apart (pictured). They can often be found foraging together, dusting themselves while standing side by side, and exploring their spacious habitat late into the day. At the sanctuary, we let the elephants tell us what they need, and we have the space and time to accommodate them. As PAWS’ co-founder, the late Pat Derby used to say, we work on “elephant time,” meaning the elephants dictate the pace of things. There is no pressure to get the elephants on display or make them “get along” because there is no other option for them. We put the welfare of all our animals first because it is what is best for them and it is the right thing to do. After all, they did not choose to be in captivity. It is our mission to give them the most natural life possible in large habitats set amid the quiet of nature, while providing the very best care. It’s the least we can do for them.